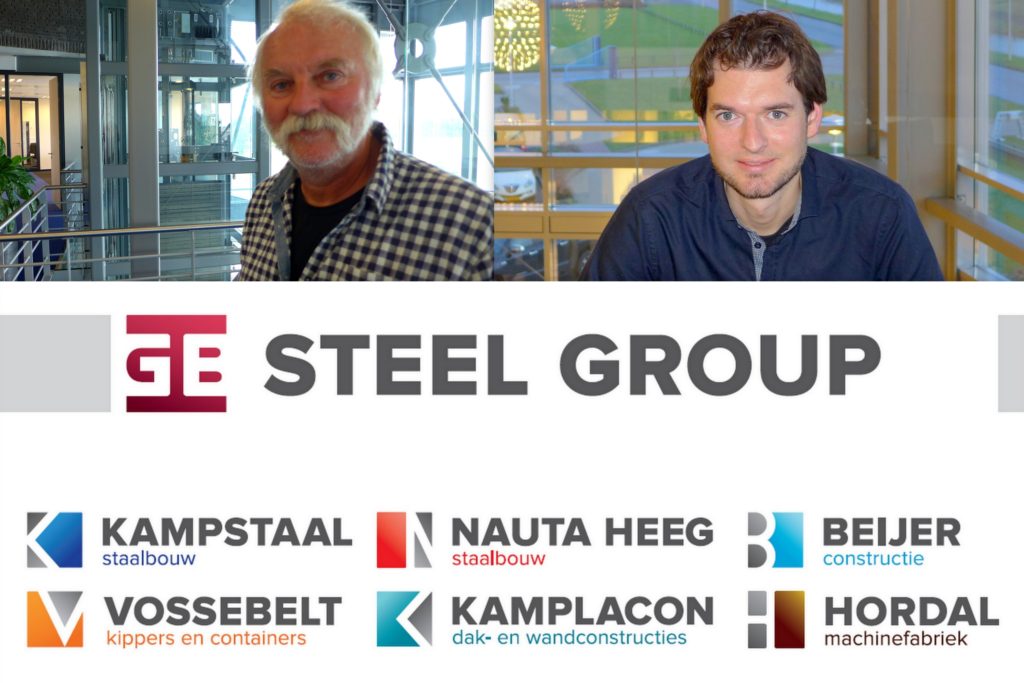 On January 1st 2015, Bob Soetekouw will take over the position of General Director from Henry van der Kamp at GB Steel Group.

Henry van der Kamp is the current General Director-Owner of GB Steel Group. On the first of January, he will take a step back and appoint Bob as the General Director. Until further notice, Henry will remain as an advisor and the owner. There will be no other staff changes. Bob is married to Marlijn van der Kamp, Henry’s eldest daughter, which means that the company remains in the family.

Henry is inextricably linked to Kampstaal, the steel construction company he started 35 years ago in Emmeloord. The company quickly grew and thanks to the acquisition of various companies, the Gilden Beheer group also grew. Gilden Beheer group was the original name of the company, but it has recently been changed to GB Steel Group. This was done not only to reflect the mutual solidarity and expertise, but also to show the company’s international ambitions. GB Steel Group consists of six steel processing companies, which supplement and assist each other and which cooperate where necessary. Kampstaal, Kamplacon, Vossebelt, Staalbouw Nauta Heeg, Beijer Constructie and Hordal are active in the commercial and industrial construction, industry, offshore and infrastructure, transport and machining sectors. They supply steel constructions, roof and wall panelling, tippers, containers, belt unloaders, slackening structures, offshore constructions and milling and machining work. They are united in steel!

In the last few years, the group has been working hard to become more professional. Examples include the new office for Kampstaal along the A6, attracting more highly-educated staff, modernizing the machinery and the new house style (new logos and websites). Now also the appointment of a young, well-educated General Director who has fresh, new ideas for the company and is confident about the future.

Bob Soetekouw, the new General Director, is 34 years old and was born and raised in Emmeloord. After completing his pre-university education (VWO) at Emelwerda College, he went on to study Business Studies at the University of Groningen. He gained work experience at Philips in Roosendaal and Eindhoven and worked as a consultant at Accenture in Amsterdam. After his ramble through the Netherlands, Bob started working at GB Steel Group. He has been working for the company for the last two years and uses the knowledge he gained for the family company. Bob is married to Marlijn van der Kamp, Henry’s eldest daughter, who also works for the company. Bas van Hoeve, the partner of Arianne, Henry’s middle daughter, has been working for some time at the company as Project Manager. In his new position of Facility Manager, he will take over the task of managing the buildings, machinery and fleet of vehicles from Henry from the middle of next year. That way, it will truly remain a family-run company!